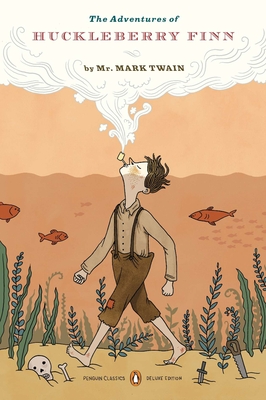 Mark Twain's tale of a boy's picaresque journey down the Mississippi on a raft conveyed the voice and experience of the American frontier as no other work had done before. When Huck escapes from his drunken father and the 'sivilizing' Widow Douglas with the runaway slave Jim, he embarks on a series of adventures that draw him to feuding families and the trickery of the unscrupulous 'Duke' and 'Dauphin'. Beneath the exploits, however, are more serious undercurrents - of slavery, adult control and, above all, of Huck's struggle between his instinctive goodness and the corrupt values of society, which threaten his deep and enduring friendship with Jim.

Mark Twain is the pseudonym of Samuel Langhorne Clemens (1835 - 1910). He was born and brought up in the American state of Missouri and, because of his father's death, he left school to earn his living when he was only twelve. He was a great adventurer and travelled round America as a printer; prospected for gold and set off for South America to earn his fortune. He returned to become a steam-boat pilot on the Mississippi River, close to where he had grown up. The Civil War put an end to steam-boating and Clemens briefly joined the Confederate army. He had already tried his hand at newspaper reporting and now became a successful journalist. He started to use the alias Mark Twain during the Civil War and it was under this pen name that he became a famous travel writer. John Seelye is Emeritus Professor of American Literature at the University of Florida. Lilli Carre is the author of Tales of the Woodsman Pete and The Lagoon. She lives in Chicago.

"All modern American literature comes from one book by Mark Twain called Huckleberry Finn. It's the best book we've had." --Ernest Hemingway