We Have Been Harmonized: Life in China's Surveillance State (Hardcover) 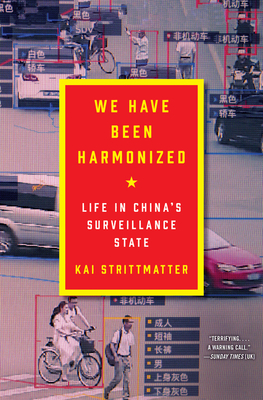 By Kai Strittmatter
$28.99
UNAVAILABLE-Possible Reasons: Backordered, Out-of-Stock, or Out-of-Print (But email us to search for a copy.)

As heard on NPR's Fresh Air, We Have Been Harmonized, by award-winning correspondent Kai Strittmatter, offers a groundbreaking look, based on decades of research, at how China created the most terrifying surveillance state in history.

China’s new drive for repression is being underpinned by unpre­cedented advances in technology: facial and voice recognition, GPS tracking, supercomputer databases, intercepted cell phone conver­sations, the monitoring of app use, and millions of high-resolution security cameras make it nearly impossible for a Chinese citizen to hide anything from authorities. Commercial transactions, including food deliveries and online purchases, are fed into vast databases, along with everything from biometric information to social media activities to methods of birth control. Cameras (so advanced that they can locate a single person within a stadium crowd of 60,000) scan for faces and walking patterns to track each individual’s move­ment. In some schools, children’s facial expressions are monitored to make sure they are paying attention at the right times. In a new Social Credit System, each citizen is given a score for good behavior; for those who rate poorly, punishments include being banned from flying or taking high-speed trains, exclusion from certain jobs, and preventing their children from attending better schools. And it gets worse: advanced surveillance has led to the imprisonment of more than a million Chinese citizens in western China alone, many held in draconian “reeducation” camps.

This digital totalitarianism has been made possible not only with the help of Chinese private tech companies, but the complic­ity of Western governments and corporations eager to gain access to China’s huge market. And while governments debate trade wars and tariffs, the Chinese Communist Party and its local partners are aggressively stepping up their efforts to export their surveillance technology abroad—including to the United States.

We Have Been Harmonized is a terrifying portrait of life under unprecedented government surveillance—and a dire warning about what could happen anywhere under the pretense of national security.

Kai Strittmatter was for more than a decade the China correspondent for Germany’s national newspaper Sueddeutsche Zeitung. Fluent in Mandarin, he has studied China for more than 30 years, including extensive stints in Xi’an and Taipei. He is now a member of the advisory board at the Mercator Institute for China Studies in Berlin. Kai lives in Copenhagen where he works as a correspondent for the Scandinavian countries.

“Terrifying. … This chilling book reveals just how far China has already gone in monitoring and controlling its citizens digitally. … China is attempting a shift unprecedented in global politics. It wants to combine the powers of a strong authoritarian regime with cutting-edge technology to create the most sophisticated surveillance state in history. Kai Strittmatter’s deeply researched and compellingly argued book makes the case that this is significant not just for China but for the world. … A warning call.” — Rana Mitter, Sunday Times (UK), a “Best Book of the Year so Far”

“A remarkable book. … The most accessible and best-informed account we have had to date of China’s transition from what scholars such as Rebecca MacKinnon used to call ‘networked authoritarianism’ to what is now a form of networked totalitarianism. …The more one reads, the more pressing one conclusion becomes: almost everything we thought we knew about contemporary China is wrong. And this has happened because the lenses through which we viewed this emerging superpower were distorted by arrogance, naivety, complacency, commercial greed and wishful thinking.” — John Naughton, The Observer, “Book of the Week”

"Strittmatter’s accessible yet hard-hitting narrative will find an audience with policymakers and general readers alike. A frightening, vital wake-up call: The West ignores the rise of an Orwellian China at its peril." — Kirkus Reviews (starred review)

“In this fine-grained and alarming portrait of modern-day China, Strittmatter details how President Xi Jinping’s ‘thirst for power’ and the tools of big data and artificial intelligence are paving the way for ‘the return of totalitarianism under digital garb.’ … Drawing on a wealth of experience in China, Strittmatter stuffs the book with telling details and incisive analysis. Even veteran China watchers will be impressed and enlightened.”
— Publishers Weekly (starred review)

“Kai Strittmatter was for many years the Beijing correspondent for the Süddeutsche Zeitung, and his excellent We Have Been Harmonised is an eye-opening account.” — John Lanchester, London Review of Books

"An eye-opening journalistic account of escalating totalitarianism, its tools and technologies, and its implications worldwide." — ALA 2021 Notable Books List

"German journalist Strittmatter urges residents of the United States and Europe to keep an eye on China, which is eager to fill any leadership vacuum created by division in Western democracies. The picture he paints, of an authoritarian government investing heavily in big data and artificial intelligence, resembles science fiction." — San Antonio Express-News, Editor's Pick

"Essential for all China watchers. This absorbing read will appeal to experts and novices alike." — Library Journal (starred review)

"Strittmatter's timely book, vividly written and excellently translated from the German by Ruth Martin, is a reminder of where this could lead." — SupChina