The Price of Butcher's Meat: A Dalziel and Pascoe Mystery (Paperback) 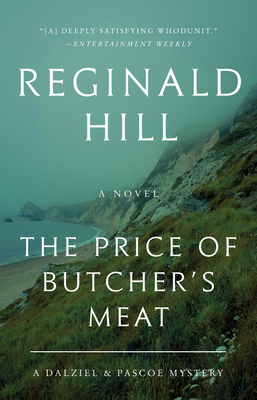 By Reginald Hill
$16.99
UNAVAILABLE-Possible Reasons: Backordered, Out-of-Stock, or Out-of-Print (But email us to search for a copy.)

This is book number 23 in the Dalziel and Pascoe series.

Internationally bestselling and Diamond Dagger Award-winning mystery writer Reginald Hill sets this mystery in the seaside resort of Sandytown, where Detective Superintendent Andy Dalziel is recovering from a bomb blast while solving a local murder in this “deeply satisfying whodunit” (Entertainment Weekly).

Having narrowly survived injuries sustained when he was caught in a huge explosion, Detective Superintendent Andy Dalziel is still on leave from the Yorkshire police department, recuperating at the Avalon Clinic in the quaint seaside resort of Sandytown. But he soon begins to suspect that those outside the convalescent home have just as many problems as the residents.

There’s a psychiatrist with more to hide than his patients, a pair of powerful landowners with very different plans for putting the resort on the map, and a man from Dalziel’s past who ought to be dead.

When someone actually does turn up dead, and under the most macabre circumstances, Chief Inspector Peter Pascoe is called onto the scene. Together again, Dalziel and Pascoe investigate a baffling and complex case as further corpses make it increasingly hard for Sandytown to justify its claim to be “Home of the Healthy Holiday.” But it's certainly been put on the map.

From charred corpses to Jane Austen allusions, The Price of Butcher’s Meat is a police procedural with something for everyone as it “offers an intellectually satisfying mystery, deep character studies and witty social commentary clothed in elegant, literate prose” (Minneapolis Star-Tribune).

"One of the best mysteries of the year. . . . It’s superb. . . . Treat yourself—the pages move as fast as a pint in Andy’s hands.” — Cleveland Plain Dealer

“Great stuff from one of the greats, and a true must for fans of British crime.” — Rocky Mountain News

“[A] meaty mystery. . . . The Fat Man is back. . . . This is good news indeed. . . . . The Price of Butcher’s Meat offers an intellectually satisfying mystery, deep character studies and witty social commentary clothed in elegant, literate prose. Hill’s mastery of narrative voice creates vitality out of devices that in lesser hands could be disastrous. . . . [It all] works brilliantly.” — Minneapolis Star Tribune

“Reginald Hill is one of the masters of crime fiction, and his customary wit, plotting, and sense of style are every bit as much in evidence in The Price of Butcher’s Meat as they are in the previous Dalziel and Pascoe novels.” — Peter Robinson, New York Times bestselling author of All the Colors of Darkness

“One of England’s most innovative and erudite mystery writers. . . . When it comes to challenging the mind, a Hill novel is better than Sudoku.” — Orlando Sentinel

“Reginald Hill’s novels are really dances to the music of time, his heroes and villains interconnecting, their stories entwining.” — Ian Rankin

“A literary frolic, Hill has brought the epistolary novel into the 21st century with e-mails and a digital voice recorder. . .. .Final word: Great stuff from one of the greats, and a true must for fans of British crime.” — Rocky Mountain News

“Hill provides his usual deeply satisfying whodunit. . . . Fans of the Fat Man are in for a treat.” — Entertainment Weekly

“Excellent. . . . Hill’s perfect pitch (especially for the short, pithy details of dialogue and character description) carries the story through all sorts of villains.” — Publishers Weekly