Death Comes for the Fat Man: A Dalziel and Pascoe Mystery (Paperback) 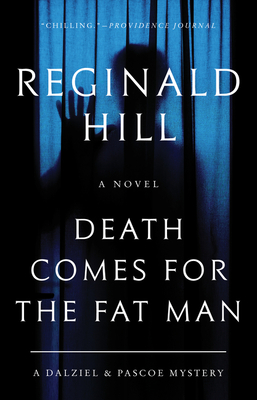 By Reginald Hill
$16.99
UNAVAILABLE-Possible Reasons: Backordered, Out-of-Stock, or Out-of-Print (But email us to search for a copy.)

This is book number 22 in the Dalziel and Pascoe series.

From bestselling and award-winning crime writer Reginald Hill, a "chilling, frightening, page-turning tale" featuring Yorkshire coppers Andy Dalziel and Peter Pascoe, "that won't let you go, even when you finally put it down." (Providence Journal).

Caught in the blast of a huge explosion, Detective Superintendent Andy Dalziel lies on a hospital bed, with only a life support system and his indomitable will between him and the Great Beyond. Meanwhile, his colleague, Chief Inspector Peter Pascoe, is determined to find those responsible.

Ignoring his own injuries, the advice of his friends, and the pleas of his wife, Pascoe follows a winding trail to the Templars, a mysterious group that believes the only way to fight terrorism is through terror. Where the arm of the law cannot reach, their work begins. Soon Pascoe comes to suspect that they may have support and sympathy in high places, from men ready to accept the death of a policeman or of any other innocent bystander as regrettable but unavoidable collateral damage.

From the streets of Manchester to the Yorkshire countryside, Pascoe searches for the truth. And above it all, like a huge zeppelin threatening to break from its moorings, hovers the disembodied spirit of Andy Dalziel.

“Should please longtime fans of the series....Dalziel and Pascoe remain among the most popular coppers in the genre.” — Booklist

“Hill delivers his usual bundle of literary treats, from a single fragrant reference to Voltaire to the voluptuous visions of earthly delights Dalziel clings to as he hovers near death....Death Comes for the Fat Man is far more politically pointed than Hill’s usual witty intellectual puzzles.” — New York Times Book Review

“When it comes to challenging the mind, a Hill novel is better than Sudoku.” — Orlando Sentinel

“A must for Hill’s many fans.” — Rocky Mountain News

“Superb. . . . This is the twenty-second novel of the series, and it may be the best.” — Tampa Tribune

“Smart, disturbing, labyrinthine mystery. . . . A chilling, frightening, page-turning tale that won’t let you go . . . even when you finally put it down.” — Providence Journal