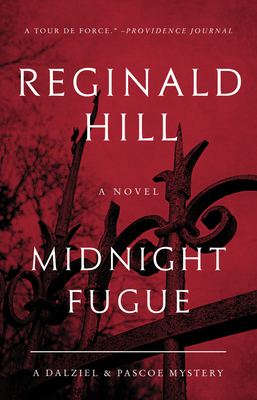 This is book number 24 in the Dalziel and Pascoe series.

Andy Dalziel, back at work after a long convalescence, is finding it harder to get back in the swing than he anticipated. It doesn’t help when he manages to skip a day and sets out for a Monday morning meeting on Sunday. So when old acquaintance Commander Mick Purdy of the Met asks him to help Gina Wolfe, who has come to Mid-Yorkshire in search of a husband missing for seven years, he is glad of what seems like a harmless diversion to get his hand back in.

But things soon start getting serious. Gina’s husband was a DI under strain after the death of their young daughter and under suspicion after serious leaks from a case he was working. Is he in fugue, or is he in flight? Or was he simply removed from command by the subject of the enquiry, entrepreneur Goldie Gidman, who has worked his way up from East End loan shark to City financier. A major political contributor and father to a rising young MP, Gidman himself is under the scrutiny of a left-wing tabloid journalist. And up in Yorkshire, Gina is being shadowed by two ruthless henchman from Gidman’s past.

Taking place within the space of a single October Sunday and alternating between mid-Yorkshire and London, Midnight Fugue is a complex, action-packed, page-turning story that builds to a dramatic conclusion and one last surprise.

“The short time frame of British author Hill’s strong 24th Dalziel and Pascoe procedural maximizes suspense without sacrificing either characterization or humor. . . . Numerous subplots don’t slow the pace, a testament to Hill’s skill in putting all the pieces together.” — Publishers Weekly (starred review)

"A must for series fans." — Booklist

“Hill keeps a particularly nasty surprise up his sleeve for last. The accelerated timetable gives Dalziel and Pascoe’s 24th a Rube Goldberg effervescence that contrasts effectively with the pervasive sadness beneath.” — Kirkus Reviews

“This seemingly simple case turns into a major puzzler... Hill writes of these tricky matters in a fluid and witty style that eventually lifts the old lion from his torpor and restores him to roaring health.” — New York Times Book Review

“The sleights of hand that Hill manages to pull off are stunning, not to mention the sly, wry style of a rogue with a dry wit and a sharp eye. We see all the players at the beginning. We see the murder take place, but exactly who’s who and why they are doing what they seem to be doing is deftly hidden from view until the last tumultuous violent pages. . . . It’s a tour de force that Hill manages to pull off with ease.” — Providence Journal

“Hill’s achievement here should be savoured. I’ve read some of his works more than a dozen times. This one is going onto my permanent shelf and I’ve already consumed it twice. Save it for a time when you can read it straight through, taking time to read each passage and follow each variation and, above all, don’t push to the end. It’s a tiny perfect thrill of perfection. This is one of Hill’s best novels, one of the best this year or any year.” — Globe and Mail (Toronto)

“Wit and wisdom collide in the outsize person of Supt. Andy Dalziel, long time head of the Yorkshire constabulary and newly back at work after the bombing that nearly killed him in Death Comes for the Fat Man... Hill juggles multiple intertwined subplots and characters, inflicting plenty of murder and mayhem on the populace before Dalziel wraps it all up in one 24-hour day. As clever and twisty as ever, this is another winner from an old master.” — Portsmouth Herald

“This complicated mystery with great characters and a fast pace will attract Hill’s loyal following and fans of British police procedurals. Hill is a very talented wordsmith as well, and his works should appeal to those seeking out well-written, carefully crafted crime novels.” — Library Journal

“[Hill] does it again in his new Dalziel and Pascoe book, Midnight Fugue, succeeding in brilliant fashion... His writing is assured and relaxed. His touch is deft, and he even allows Fat Andy to show a caring and sentimental side, something surprising in the great old copper’s senior years.” — Toronto Star

"One of the best of the Brits, Reginald Hill, adds another winner to his résumé and another chapter to the saga of Dalziel and Pascoe—with Midnight Fugue." — San Diego Union-Tribune

“[The] most amusing and satisfying of all the Dalziel and Pascoe books. . . . A master of the British police procedural.” — Tampa Tribune