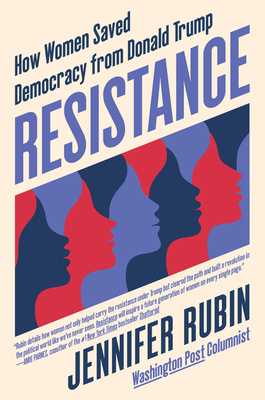 By Jennifer Rubin
$18.99
UNAVAILABLE-Possible Reasons: Backordered, Out-of-Stock, or Out-of-Print (But email us to search for a copy.)

In the tradition of Shattered and Game Change, Washington Post columnist Jennifer Rubin provides an insider’s look at how women across the political spectrum carried a revolution to the ballot box and defeated Donald Trump, based on interviews with key figures such as Kamala Harris, Amy Klobuchar, Stacey Abrams, Nancy Pelosi, and many more.

In a compelling narrative, bookended by Donald Trump’s 2016 victory and his 2020 defeat, Rubin delivers an absorbing analysis of the women’s counter-Trump revolution. Resistance tracks a set of dynamic women voters, activists and politicians who rose up when Donald Trump took the White House and fundamentally changed the political landscape. From the first Women’s March the day after Trump’s inauguration to the Blue Wave in the 2018 midterms to the flood of female presidential candidates in 2020 to the inauguration of Kamala Harris, women from across the ideological spectrum entered the political arena and became energized in a way America had not witnessed in decades. They marched, they organized, they donated vast sums of cash, they ran for office, they made new alliances. And they defeated Donald Trump.

Democratic women candidates learned that they could win in large numbers, even in red districts. Black women voters in 2020 surged in Georgia and in suburbs in key swing states. Women across the country voted in greater numbers than in any previous election, flipped the Senate, and ensured victory for the first female Vice President in the nation’s history. While Democrats recorded impressive victories, Republican women delivered critical victories of their own.

From the White House to Congress, from activists to protestors, from liberals to conservatives, Resistance delivers the first comprehensive portrait of women’s historic political surge provoked by the horror of President Trump. This is the indelible story of how American women transformed their own lives, vanquished Trump, secured unprecedented positions of power and redefined US politics decades to come.

Resistance is essential reading for understanding the most important election in American history and the role women played in redesigning modern politics.

Jennifer Rubin writes reported opinion for the Washington Post. She covers politics and policy, foreign and domestic, and provides insight into the conservative movement, the Republican and Democratic parties, and threats to Western democracies. Rubin, who is also an MSNBC contributor, came to the Post after three years with Commentary magazine. Prior to her career in journalism, Rubin practiced labor law for two decades, an experience that informs and enriches her work. She is a mother of two sons and lives with her husband in D.C.

“A thoughtful study of the critical role of women in containing and defeating Donald Trump…. An excellent contribution to the literature of contemporary electoral politics.”
— Kirkus Reviews (starred review)

“Illuminating… a cohesive and wide-ranging look at how women led the fight against the Trump administration.”
— Publishers Weekly

"From her respected positions as a columnist for the Washington Post and contributor to MSNBC, Rubin is uniquely situated to assess this political uprising and chronicle the role of women on the front lines in the war to claim gender equity and protect democratic values. The result is a keenly analytical appreciation for and deeply personal connection to the ways in which the modern American female electorate has been reawakened and reenergized to reimagine a more inclusive political landscape."
— Booklist

“This powerful and insightful book tells the story of women from all walks of life who led what amounted to the third women’s revolution: the resistance to Donald Trump and all that he stands for. Jennifer Rubin offers an antidote to Trump-era sexism, racism, indecency, and corruption: It’s the women of America who care more and do more for their country than most men, modern-day suffragettes like Kamala Harris, Neera Tanden, Ilyse Hogue, Sarah Longwell, and Abigail Spanberger. There is hope for mankind."
— Ron Fournier, former political reporter and bestselling author of Love That Boy and Applebee’s America

“Sweeping and smart—Jennifer Rubin dedicates her lively account of the resistance to Donald Trump and his presidency to ‘democracy’s defenders,’ a group that was led and defined by women. Among the unintended consequences of his surprising 2016 victory, this deeply reported book finds, was the movement he forged among them, with powerful consequences that reverberate today.”
— Susan Page, author of The Matriarch and Madam Speaker