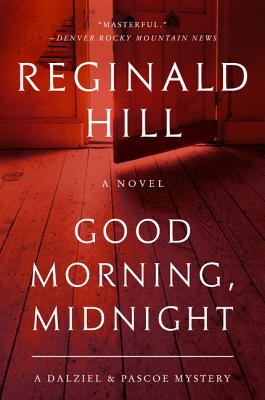 This is book number 21 in the Dalziel and Pascoe series.

From Reginald Hill, acclaimed mystery writer and winner of the prestigious Diamond Dagger Award, comes a brilliant psychological story of a mysterious death that echoes one in the past.

Prominent businessman Pal Maciver locked himself in his study and shot himself. It's an open-and-shut case, as far as Detective Superintendent Andy Dalziel is concerned. Except...Maciver's father died in an almost identical manner ten years earlier, and "Fat Andy" was the investigating officer. Pal's strange and strained relationship with his beautiful, enigmatic stepmother, Kay Kafka, also raises warning flags. And the family's shady corporate dealings carry two apparent acts of self-slaughter far beyond the borders of Yorkshire, causing policeman Peter Pascoe to question his superior's reticence...and his motives.

“Hill writes with an intelligence and wit that make him, in my opinion, possibly the best crime writer of our day.” — Capital Times (Madison, Wisconsin)

“Reginald Hill turns the genre on its ear in Good Morning, Midnight....well worth the price of admission.” — Denver Rocky Mountain News

“Reginald Hill’s novels are really dances to the music of time, his heroes and villains interconnecting, their stories entwining.” — Ian Rankin

“A real treat. The characters are deftly drawn, the plot constantly delivers surprises and the assured narrative demonstrates again what a terrific comic writer [Hill] is.” — The Observer (UK)

“Literate without being pedantic, humorous without undercutting suspense, Hill’s book will keep you reading far beyond the midnight hour.” — Sunday Express (London)

“Hill is in splendid form here, his plot masterful, his scenario up-to-the-minute regarding world events, and his writing suspenseful, stylish, literary...and even philosophical. Topnotch crime fiction from a master.” — Library Journal

“Hill’s writing seems to only get sharper and punchier.” — San Antonio Express-News

“Hill has provided readers with a superior example of the mystery form -- one with a deliciously cold sting in the final pages.” — Publishers Weekly (starred review)

“[Hill] unwinds skeins of intrigue, passion and betrayal....There aren’t many novels in which the words themselves help add to the challenge of identifying a killer.” — Orlando Sentinel

“Hill’s...continued willingness to challenge the mystery genre and the masterful way he works his story are well worth the price of admission.” — Rocky Mountain News

“He may not be the most famous British mystery author...but Reginald Hill may very well be the best.” — Tampa Tribune

“The meandering complexity of the plot and the entertaining departmental byplay succeed in teasing the reader along to the neat bookend of a finale.” — Houston Chronicle