Dialogues of the Dead: A Dalziel and Pascoe Mystery (Paperback) 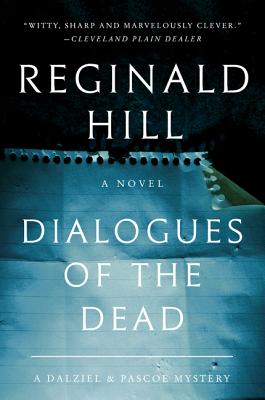 This is book number 19 in the Dalziel and Pascoe series.

Reginald Hill's “Dialogues of the Dead is a bridge that spans the classic English whodunit and the dark heart of contemporary crime fiction, the serial-killer novel....The fertility of Hill's imagination, the range of his power, the sheer quality of his literary style never cease to delight.” (Val McDermid)

Normally, there would be nothing sinister about a death by drowning and a motorcycle fatality—had these tragic occurrences not been predicted before the fact in a pair of macabre "Dialogues" submitted to a Yorkshire short story competition. Yet the local police department is slow to act—until the arrival of a third Dialogue...and another corpse.

A darkness is settling over a terrorized community, brought on by a genius fiend who hides clues to his horrific acts in complex riddles and brilliant wordplay. Now two seasoned CID investigators, Peter Pascoe and "Fat Andy" Dalziel, are racing against a clock whose every tick signals more blood and outrage, caught in the twisted game of a diabolical killer who is turning their jurisdiction into a slaughterhouse.

“Hill, a graceful sylist, reveals only enough at a time to keep the reader hooked.” — Wall Street Journal

“Brilliantly conceived and skillfully executed, Dialogues of the Dead is a duel of wits.” — Dallas Morning News

“Lethal fun. . . . filled with one surprise after another. Hill is never predictable. . . . The incredible ending of this book is unlike any other mystery I have read.” — Milwaukee Journal Sentinel

“Dialogues of the Dead is a bridge that spans the classic English whodunnit and the dark heart of contemporary crime fiction, the serial killer novel….The fertility of Hill’s imagination, the range of his power, the sheer quality of his literary style never cease to delight.” — Val McDermid

“Reginald Hill delivers literate, complex, and immensely satisfying thrillers. Dialogues of the Dead is Hill at his best. . . . [with a] totally unexpected outcome in the final pages.” — Orlando Sentinel

“By turns convoluted and laugh-out-loud funny, Dialogues is a brilliant example of a crime novel icon at the top of his form.” — BookPage