The House of Yan: A Family at the Heart of a Century in Chinese History (Paperback) 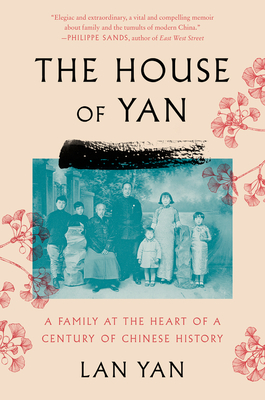 Through the sweeping cultural and historical transformations of China, entrepreneur Lan Yan traces her family’s history through early 20th Century to present day.

The history of the Yan family is inseparable from the history of China over the last century. One of the most influential businesswomen of China today, Lan Yan grew up in the company of the country's powerful elite, including Zhou Enlai, Deng Xiaoping, and other top leaders. Her grandfather, Yan Baohang, originally a nationalist and close to Chiang Kai-shek and his wife, Soong May-ling, later joined the communists and worked as a secret agent for Zhou Enlai during World War II. Lan's parents were diplomats, and her father, Yan Mingfu, was Mao's personal Russian translator.

Inspite of their elevated status, the Yan's family life was turned upside down by the Cultural Revolution. One night in 1967, in front of a terrified ten-year-old Lan, Red Guards burst into the family home and arrested her grandfather. Days later, her father was arrested, accused of spying for the Soviet Union. Her mother, Wu Keliang, was branded a counter-revolutionary and forced to go with her daughter to a re-education camp for more than seven years, where Lan came of age as a high school student.

In recounting her family history, Lan Yan brings to life a century of Chinese history from the last emperor to present day, including the Cultural Revolution which tore her childhood apart. The little girl who was crushed by the Cultural Revolution has become one of the most active businesswomen in her country. In telling her and her family's story, she serves up an intimate account of the history of contemporary China.

Lan Yan was not allowed to enter higher education because her Communist family had been designated as counter-revolutionaries. In 1969, she was sent to a re-education camp in Henan, where her mother had been for a year. In 1977, the year after the Cultural Revolution ended, she enrolled at university. Exceptionally motivated, she was awarded grants to study at the most prestigious universities in Europe and the United States. In 1991, she joined the Gide Loyrette Nouel law firm based in Paris and became the first foreign woman to make partner. In 1998, she returned to China to run the firm's Beijing office. In 2011, Lan Yan joined Lazard as managing director to lead its Chinese activities. Today, she is the vice chairman of investment banking of Lazard and the chairman and CEO of Lazard Greater China (Beijing, Hong Kong, Taiwan).

&#8220A powerful memoir… A thoughtful, astute narrative that helps Western readers understand the rise of the new China from the ashes of terror.”
— Kirkus Reviews (starred review)

"Some of the most arresting passages are about the warmth of family life: homely activities like pickling cabbages together or cooking dumplings. You can almost smell the fragrant steam, and what happens when the familiar, the commonplace, is stripped away and existence loses all logic with book burnings, head shavings, ransackings and meaningless cruelties . . . . For its personal insights and universal warnings about what humans are capable of, both good and bad, Yan’s readable and touching memoir of her family deserves to be told, and she tells it well."
— Washington Post