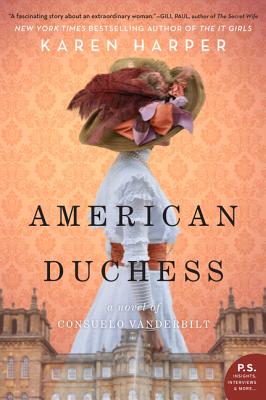 Comments: What a magnificent story!  It was slow to start, but once it got rolling, it was an intriguing read.  I enjoyed this inside look at the social and political trials of a Gilded Age heiress who was sold off for an English title.

Before there was Meghan Markle, there was Consuelo Vanderbilt, the original American Duchess.  Perfect for readers of Jennifer Robson and lovers of Downton Abbey.

Karen Harper tells the tale of Consuelo Vanderbilt, her “The Wedding of the Century” to the Duke of Marlborough, and her quest to find meaning behind “the glitter and the gold.”

On a cold November day in 1895, a carriage approaches St Thomas Episcopal Church on New York City’s Fifth Avenue. Massive crowds surge forward, awaiting their glimpse of heiress Consuelo Vanderbilt. Just 18, the beautiful bride has not only arrived late, but in tears, yet her marriage to the aloof Duke of Marlborough proceeds. Bullied into the wedding by her indomitable mother, Alva, Consuelo loves another. But a deal was made, trading some of the vast Vanderbilt wealth for a title and prestige, and Consuelo, bred to obey, realizes she must make the best of things.

At Blenheim Palace, Consuelo is confronted with an overwhelming list of duties, including producing an “heir and a spare,” but her relationship with the duke quickly disintegrates. Consuelo finds an inner strength, charming everyone from debutantes to diplomats including Winston Churchill, as she fights for women’s suffrage. And when she takes a scandalous leap, can she hope to attain love at last…?

From the dawning of the opulent Gilded Age, to the battles of the Second World War, American Duchess is a riveting tale of one woman’s quest to attain independence—at any price.

New York Times and USA Today bestselling author KAREN HARPER is a former Ohio State University instructor and high school English teacher. Published since 1982, she writes contemporary suspense and historical novels about real British women. Two of her recent Tudor-era books were bestsellers in the UK and Russia. Harper won the Mary Higgins Clark Award for Dark Angel, and her novel Shattered Secrets was judged one of the best books of the year by Suspense Magazine.

“This is a fascinating story about an extraordinary woman.”
— Gill Paul, bestselling author of The Secret Wife

“This absorbing and evocative tale is an excellent reminder of what women have long sacrificed over the centuries for family honor and duty, and how they navigated their circumstances and influence to change the world for the better.”
— Heather Webb, international bestselling author of Last Christmas in Paris