Your Duck Is My Duck: Stories (Hardcover) 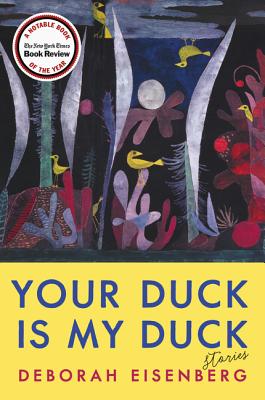 Bookseller: Ellyne
Title: Your Duck Is My Duck: Stories

Comments:
I wish that I had the breadth ad dexterity - and everything else - that this author has with words, sentences, stories... In the first story, the narrator says to her therapist: "I'm hurling through time, strapped to an explosive device, my life. Plus, it's beginning to look like a photo finish - me first, or the world." Can it get any better? YES! Just keep reading, story after story. (Sadly, only 6 if them, but long-ish!)

Her first book since 2006, I loved this collection, felt pulled in and tilted 90 degrees, seeing things clearly, but from a different perspective. Magical, but not magical realism; subtly political; delicious.

A much-anticipated collection of brilliantly observant short stories from one of the great American masters of the form.

At times raucously hilarious, at times charming and delightful, at times as solemn and mysterious as a pond at midnight, Deborah Eisenberg’s stories gently compel us to confront the most disturbing truths about ourselves—from our intimate lives as lovers, parents, and children, to our equally troubling roles as citizens on a violent, terrifying planet.

Each of the six stories in Your Duck is My Duck, her first collection since 2006, has the heft and complexity of a novel. With her own inexorable but utterly unpredictable logic and her almost uncanny ability to conjure the strange states of mind and emotion that constitute our daily consciousness, Eisenberg pulls us as if by gossamer threads through her characters—a tormented woman whose face determines her destiny; a group of film actors shocked to read a book about their past; a privileged young man who unexpectedly falls into a love affair with a human rights worker caught up in an all-consuming quest that he doesn't understand.

In Eisenberg’s world, the forces of money, sex, and power cannot be escaped, and the force of history, whether confronted or denied, cannot be evaded. No one writes better about time, tragedy and grief, and the indifferent but beautiful universe around us.

Deborah Eisenberg is a MacArthur Foundation Fellow and the recipient of honors including the 2011 PEN/Faulkner Award for Fiction, a Whiting Writer’s Award, and a Guggenheim Fellowship. Eisenberg has published four collections of stories: Transactions in a Foreign Currency (1986), Under the 82nd Airborne (1992), All Around Atlantis (1997), and Twilight of the Superheroes (2006). Her first two story collections were republished in one volume as The Stories (So Far) of Deborah Eisenberg (1997). All four volumes were reprinted in 2010 in The Collected Stories of Deborah Eisenberg (2010). She is a professor of writing at Columbia University.

“[Eisenberg] reminds us in every line of certain saving virtues: wit, wild intelligence, great heart, the beauty of the inquiring human voice. If our culture can produce a writer this wonderful, there must be something beautiful about us yet.”
— George Saunders

Instead of forcing her characters’ stories into neat, arbitrary, preordained shapes, [Eisenberg] allows them to grow organically into oddly shaped, asymmetrical narratives—narratives that possess all the surprising twists and dismaying turns of real life.”
— New York Times

“Deborah Eisenberg, one of America’s finest writers, offers new ways of seeing and feeling, as if something were being perfected at the core.”
— San Francisco Chronicle

“Reading [Eisenberg] makes you wish, as you study the family in front of you in the grocery line, that you could see their thoughts rendered as one of Eisenberg’s stunning inner monologues.”
— Los Angeles Times

“...[S]uperlative and entertaining...Eisenberg is funny, grim, biting, and wise, but always with a light touch and always in the service of worlds that extend far beyond the page. A virtuoso at rendering the flickering gestures by which people simultaneously hide and reveal themselves, Eisenberg is an undisputed master of the short story.”
— Publishers Weekly (starred review)

“[Eisenberg] is always worth the wait...so instantly absorbing that it feels like an abduction...This book offers no palliatives to its characters or to its readers — no plan of action. But it is a compass.”
— The New York Times

“Eisenberg is a gorgeous writer...I thank my stars that there’s a writer in the increasingly imperiled world as smart and funny and blazingly moral and devastatingly sidelong as she is.”
— New York Times Book Review

“Every character is memorable, every situation seizes our attention, and not a single word is out of place...It’s my fervent hope...that someday we’ll have the opportunity to look back on the many more stories that Deborah Eisenberg has yet to write.”
— Financial Times