The Great Halifax Explosion: A World War I Story of Treachery, Tragedy, and Extraordinary Heroism (Paperback) 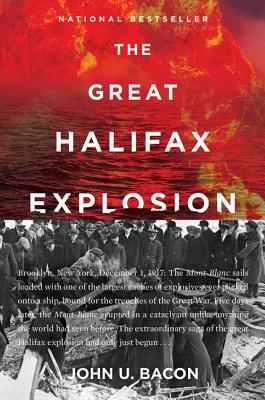 Comments:
In 1917 Halifax had such excitement at the docks. Two ships hit each other and then there was a fire. School children as well as other residents were rushing down to see what happened. Curious, the fire was getting better; no amount of water could extinguish it.
And then, within 5 minutes, the EXPLOSION! Buildings disappeared and so did many of the residents...It was a ground wave, then an air wave plus a 35 ft. tsunami!
People feared it was the Germans attaching their safe port. It was a munitions ship LOADED & ready to sail to Europe.
This event was compared to the Johnstown, PA flood of 1889, the San Francisco earthquake, Galvestin, Texas hurricane 1900 and the Chicago fire of 1871. The effects were the prequel to the atomic bomb.
Death & destruction because of decisions made-and NOT made.
But humanity came through especially with medical relief & more from Boston. Incredible action by locals, survivors themselves, Canadians & International aid-all at the time of WWl.
Great descriptions, human stories, nature (bad time for snowstorms!), horses working (since cars couldn't) and the US & Canadian relationship really changed in 1917.
Amazing history!

The "riveting" (National Post) tick-tock account of the largest manmade explosion in history prior to the atomic bomb, and the equally astonishing tales of survival and heroism that emerged from the ashes

After steaming out of New York City on December 1, 1917, laden with a staggering three thousand tons of TNT and other explosives, the munitions ship Mont-Blanc fought its way up the Atlantic coast, through waters prowled by enemy U-boats. As it approached the lively port city of Halifax, Mont-Blanc's deadly cargo erupted with the force of 2.9 kilotons of TNT—the most powerful explosion ever visited on a human population, save for HIroshima and Nagasaki. Mont-Blanc was vaporized in one fifteenth of a second; a shockwave leveled the surrounding city. Next came a thirty-five-foot tsunami. Most astounding of all, however, were the incredible tales of survival and heroism that soon emerged from the rubble.

This is the unforgettable story told in John U. Bacon's The Great Halifax Explosion: a ticktock account of fateful decisions that led to doom, the human faces of the blast's 11,000 casualties, and the equally moving individual stories of those who lived and selflessly threw themselves into urgent rescue work that saved thousands.

The shocking scale of the disaster stunned the world, dominating global headlines even amid the calamity of the First World War. Hours after the blast, Boston sent trains and ships filled with doctors, medicine, and money. The explosion would revolutionize pediatric medicine; transform U.S.-Canadian relations; and provide physicist J. Robert Oppenheimer, who studied the Halifax explosion closely when developing the atomic bomb, with history's only real-world case study demonstrating the lethal power of a weapon of mass destruction.

Mesmerizing and inspiring, Bacon's deeply-researched narrative brings to life the tragedy, bravery, and surprising afterlife of one of the most dramatic events of modern times.

John U. Bacon is the author of the national bestseller The Great Halifax Explosion and five bestselling books about college football, including Three and Out, Fourth and Long, Endzone, and Bo’s Lasting Lessons, co-authored with Michigan coach Bo Schembechler. A former feature writer for the Detroit News, his writing has been recognized three times in The Best American Sports Writing series. He appears often on NPR and national television, including ESPN’s 2019 documentary series on college football. He has taught at Northwestern University’s Medill School of Journalism and the University of Michigan. A popular public speaker, he lives in Ann Arbor with his wife and son.

“The Great Halifax Explosion is absorbing from first page to last. With deep research and evocative writing, John U. Bacon has brought back to life this devastating wartime event and illuminated its lasting meaning.” — DAVID MARANISS, Pulitzer Prize winner, and author of Once in a Great City

“Fans of Ken Burns, Daniel James Brown’s The Boys in the Boat, and John Hersey’s Hiroshima will find in John Bacon’s meticulous reporting a story that literally rocked the world. This is a story with an enormous heart; this is an author with astounding range.” — DOUG STANTON, New York Times bestselling author of The Odyssey of Echo Company

“[A] prodigiously researched and gripping account. ... [A] vivid narrative that make[s] extensive use of archive material, family histories and newspaper accounts.” — Toronto Star

“An eternal story worth knowing. ... Well-researched and told in an engaging style.” — San Antonio Express-News

“The most destructive moment of World War I occurred far from the Western Front, in Canada, where an explosion blew a city apart but propelled two nations together. John U. Bacon, a superbly talented historian and story teller, has rescued from obscurity an astonishing episode of horror and heroism.” — GEORGE F. WILL

“John U. Bacon’s The Great Halifax Explosion is the seminal account of one of the bloodiest man-made disasters in world history, which killed some 2,000 people. This is a riveting, well-written and researched World War I book. Highly recommended!” — DOUGLAS BRINKLEY, author of Cronkite

“Riveting. ... Gripping. ... Bacon applies something like a play-by-play strategy to his non-fiction that makes it nearly bingeable. ... A pleasure to read.” — National Post

“Bacon does an excellent job of bringing the century-old events to life. He has immersed himself in old letters and journalistic accounts, finding the human stories that allow readers to connect with stories of men, women and children whose lives were ended or altered by the terrible explosion.” — Chicago Tribune

“Engrossing and enthralling. ... Gripping and deeply relatable. ... A captivating and emotionally investing journey into a community’s great sadness and how it builds strength in times of unfathomable devastation. … A striking, poignant reminder that what is forgotten should be remembered once more.” — Pittsburgh Post-Gazette

“A story of the triumph of the human spirit in the face of tragedy. Told convincingly and powerfully.” — John Baldoni, Forbes

“Bacon has crafted a marvelous story about this huge tragedy. ... Ultimately, it is a book about the power of the human spirit and how ordinary people overcome unimaginable horror to rebuild their lives and help others. It is indeed a story for our times.” — Providence Journal

“Definitive. ... Bacon recreates the recklessness that caused the tragedy, the selfless rescue efforts that saved thousands, and the inspiring resilience that rebuilt the town. ... Brings to light one of the most dramatic events of the twentieth century.’” — Book Riot

“Bacon’s discovery of a trove of Barss’s letters... injects his book with a fresh and compelling storyline.” — Toronto Globe and Mail

“Bacon is a fine storyteller, who brings all of his skills as a historian to bear on the tragedy. ... Anyone who wants to know more about a remarkable story should not miss this book.” — CBC Radio

“Many Americans are unaware of the terrible tragedy so ably described in this book. The author’s inclusion of many personal accounts greatly enlivens the narrative. ... The Great Halifax Explosion sheds new light on this sad but fascinating event.” — The Journal of America’s Military Past

“Well-documented. … Details the lapses in procedure and judgment that led up to the catastrophe, describing both the victims’ accounts and the enormous outpouring of aid from both Canada and America. … An accessible narrative useful to all World War I collections.” — Library Journal

“The Halifax Explosion of 1917 has been virtually forgotten, at least until this excellent book. ... Reads like an exciting novel. ... Once you start reading, it will be hard to put down. Highly recommended.” — Free Lance-Star (Fredericksburg)

“A vivid reconstruction of history that turns out to have been in great measure forgotten even by those who thought they already knew all about it. The telling of the story is spectacularly cinematic.” — David Frum, The Atlantic

“A really remarkable book, exactly the kind I love reading. The research was put together with care to create a full portrait of an event and a moment in time -- and written with pace and craft. I just love it. I already want to read it again. I don’t think I can really express my admiration adequately.” — Glenn Stout, author of Fenway 1912