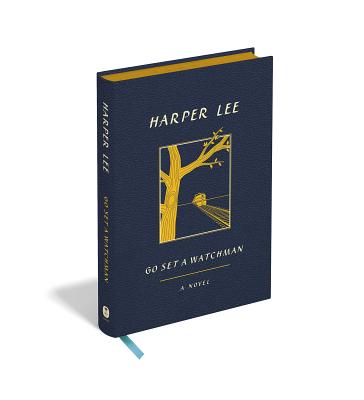 By Harper Lee
UNAVAILABLE AT THIS TIME (Possible reasons: Backordered, Out-of-Stock Indefinitely, or Print-on-Demand only)
OUT OF PRINT

Maycomb, Alabama. Twenty-six-year-old Jean Louise Finch—“Scout”—returns home from New York City to visit her aging father, Atticus. Set against the backdrop of the civil rights tensions and political turmoil that were transforming the South, Jean Louise’s homecoming turns bittersweet when she learns disturbing truths about her close-knit family, the town, and the people dearest to her. Memories from her childhood flood back, and her values and assumptions are thrown into doubt. Featuring many of the iconic characters from To Kill a Mockingbird, Go Set a Watchman perfectly captures a young woman, and a world, in painful yet necessary transition out of the illusions of the past—a journey that can only be guided by one’s own conscience.

Written in the mid-1950s, Go Set a Watchman imparts a fuller, richer understanding and appreciation of Harper Lee. Here is an unforgettable novel of wisdom, humanity, passion, humor, and effortless precision—a profoundly affecting work of art that is both wonderfully evocative of another era and relevant to our own times. It not only confirms the enduring brilliance of To Kill a Mockingbird, but also serves as its essential companion, adding depth, context, and new meaning to an American classic.

“Go Set a Watchman is such an important book, perhaps the most important novel on race to come out of the white South in decades…
— New York Times Opinion Pages: Taking Note

“Go Set a Watchman provides valuable insight into the generous, complex mind of one of America’s most important authors.”
— USA Today

“Harper Lee’s second novel sheds more light on our world than its predecessor did.”
— Time

“…the voice we came to know so well in To Kill a Mockingbird - funny, ornery, rulebreaking - is right here in Go Set a Watchman, too, as exasperating and captivating as ever.”
— Chicago Tribune

“Don’t let ‘Go Set a Watchman’ change the way you think about Atticus Finch…the hard truth is that a man such as Atticus, born barely a decade after Reconstruction to a family of Southern gentry, would have had a complicated and tortuous history with race.”
— Los Angeles Times

“A significant aspect of this novel is that it asks us to see Atticus now not merely as a hero, a god, but as a flesh-and-blood man with shortcomings and moral failing, enabling us to see ourselves for all our complexities and contradictions.”
— Washington Post

“The success of Go Set a Watchman... lies both in its depiction of Jean Louise reckoning with her father’s beliefs, and in the manner by which it integrates those beliefs into the Atticus we know.”
— Time

“Go Set a Watchman’s greatest asset may be its role in sparking frank discussion about America’s woeful track record when it comes to racial equality.”
— San Francisco Chronicle

“Go Set a Watchman comes to us at exactly the right moment. All important works of art do. They come when we don’t know how much we need them.”
— Chicago Tribune

“What makes Go Set a Watchman memorable is its sophisticated and even prescient view of the long march for racial justice. Remarkably, a novel written that long ago has a lot to say about our current struggles with race and inequality.”
— Chicago Tribune

“Go Set a Watchman’s gorgeous opening is better than we could have expected.”
— Vanity Fair

“Go Set a Watchman is more complex than Harper Lee’s original classic. A satisfying novel… it is, in most respects, a new work, and a pleasure, revelation and genuine literary event.”
— The Guardian

“Lee’s ability with description is evident… with long sentences beautifully rendered and evoking a world long lost to history, but welcoming all the same.”
— CNN.com

“A coming-of-age novel in which Scout becomes her own woman…Go Set a Watchman’s voice is beguiling and distinctive, and reminiscent of Mockingbird. (It) can’t be dismissed as literary scraps from Lee’s imagination. It has too much integrity for that.”
— The Independent

“Atticus’ complexity makes Go Set a Watchman worth reading. With Mockingbird, Harper Lee made us question what we know and who we think we are. Go Set a Watchman continues in this noble literary tradition.”
— New York Post

“A deftly written tale… there’s something undeniably comforting and familiar about sinking into Lee’s prose once again.”
— People

“One overarching theme that many critics have zeroed in on is that there is a lot to learn from the novel, as both a writer and a reader.”
— Vulture

“As Faulkner said, the only good stories are the ones about the human heart in conflict with itself. And that’s a pretty good summation of Go Set a Watchman.”
— Daily Beast

“Go Set a Watchman offers a rich and complex story… To make the novel about pinning the right label on Atticus is to miss the point.”
— Bloomberg View

“In this powerful newly published story about the Finch family, Lee presents a wider window into the white Southern heart, and tells us it is finally time for us all to shatter the false gods of the past and be free.”
— NPR's "Code Switch"

“[Go Set a Watchman is] filled with the evocative language, realistic dialogue and sense of place that partially explains what made Mockingbird so beloved.”
— Buffalo News