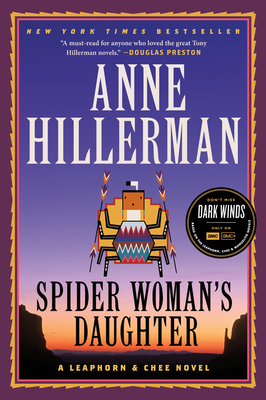 This is book number 1 in the A Leaphorn, Chee & Manuelito Novel series.

"Spider Woman’s Daughter is an intricately plotted, suspenseful, colorful, and unforgettable journey. Readers will fall in love with Bernie Manuelito and look forward to Anne Hillerman’s next effort in what should be a long, enjoyable, successful series. Her depiction of the Navajo Nation is spot on. I loved this book." — Jo-Ann Mapson, author of award-winning Solomon's Oak and Finding Casey

It happened in an instant. After a breakfast with colleagues, Navajo Nation Police Officer Bernadette Manuelito sees a sedan careen into the parking lot and hears a crack of gunfire. When the dust clears, someone very close to her is lying on the asphalt in a pool of blood. With the victim in the hospital fighting for his life, every person in the squad and the local FBI office are hell-bent on catching the gunman. Bernie, too, wants in on the investigation, especially when her husband, Sergeant Jim Chee, is put in charge of finding the shooter.

Bernie and Chee discover that a cold case involving Chee’s former boss and partner, retired lieutenant Joe Leaphorn, may hold the key to the shooting. Digging into the old investigation with fresh eyes and new urgency, husband and wife find themselves inching closer to the truth with every clue . . . and closer to a killer who will do anything to prevent justice from taking its course.

“From the utterly shocking opening scene to the final twist, Anne Hillerman offers a thrilling Southwestern tale featuring the unforgettable characters of Jim Chee and Joe Leaphorn, set in the vivid landscapes of Navajo country. Spider Woman’s Daughter is a must read for anyone who loved the great Tony Hillerman novels, now carried on by his amazingly talented daughter, a superb writer herself. I dearly hope this is the first of many.” — Douglas Preston, #1 New York Times bestselling author

“A worthy continuation of Tony Hillerman’s Leaphorn & Chee series. His daughter Anne ably returns to Navajo Country in a colorful mystery that is both fascinating and vividly compelling. From its startling first scene to its gripping climax, Spider Woman’s Daughter engages the reader in a complex web of intrigue and deception.” — David Morrell, New York Times bestselling author of Murder as a Fine Art

"Spider Woman’s Daughter is an intricately plotted, suspenseful, colorful, and unforgettable journey. Readers will fall in love with Bernie Manuelito and look forward to Anne Hillerman’s next effort in what should be a long, enjoyable, successful series. Her depiction of the Navajo Nation is spot on. I loved this book." — Jo-Ann Mapson, author of award-winning Solomon's Oak and Finding Casey

“Chip off the literary block—there are a lot of things Tony taught is daughter, Anne, and one of them was how to tell a good story. Spider Woman’s Daughter is a proud addition to the legacy, capturing the beauty and breath of the Southwest as only a Hillerman can.” — Craig Johnson, author of the Walt Longmire Mysteries, the basis for A&E's hit television series Longmire

“You will love this novel! Not only are old friends Joe Leaphorn and Jim Chee back, we get to know the delightful, intrepid and thoroughly modern Navajo police officer, Bernadette Manuelito… Anne Hillerman comes naturally to writing mysteries, and Spider Woman’s Daughter is nothing less than a smashing debut.” — Margaret Coel, author of Killing Custer

“Hillerman fans, rejoice! Joe Leaphorn and Jim Chee have returned, thanks to Tony’s daughter Anne. She captures the feel of her father’s books, the wonderful understanding of a place and a people that made his so popular, and she has an ear for his unique voice. It’s a remarkable accomplishment.” — Charles Todd

“Pot hunters, archaeologists, controversy over the museum display of tribal objects, and insurance fraud culminate in a heart-stopping, action-packed conclusion as Bernadette and Jim risk their lives to bring a would-be assassin to justice.... Fans of Southwestern mysteries will cheer this return of Leaphorn and Chee.” — Library Journal (starred review)

“So seamless is the writing transition from father to daughter, it is easy to forget that one is reading Anne, not Tony. That said, Anne brings a welcome female perspective to the table, fleshing out several of the female supporting characters but never forgetting the importance of the two main players who define the series. Nicely done on every level.” — BookPage

“His Leaphorn/Chee series is one of the most original and influential in modern crime fiction.” — Portland Sunday Oregonian

"A daughter takes on her famous father’s legacy in resuming a series focused on Navajo culture…maintaining the integrity…throughout." — Kirkus Reviews

“Difficult to put down...If you love mysteries, this book is for you.” — Examiner.com