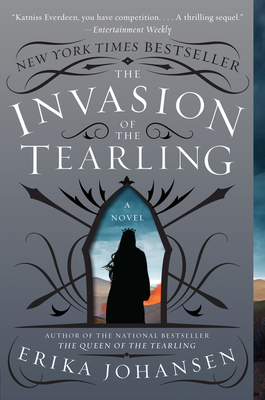 I stayed up until 2am to finish this wonderful, addictive follow-up to The Queen of the Tearling. Johansen continues to intrigue and surprise as Kelsea's story begins to unfurl alongside a fascinating new character. As the past and the present interweave and even begin to merge (or collide??!), prepare to question everything you thought you knew—about the Crossing, the Tearling, about the nature of the magic itself, and even the true identities and alliances of your favorite characters, all back in full force, making this series the page-turner no one should miss!

“I loved Johansen's first book, Queen of the Tearling, and was thrilled to find the sequel to be equally enjoyable. The new book focuses on the Mort invasion of the Tearling and Queen Kelsea's growth, both as a queen and as a person. Faced with many difficult decisions, an enemy abroad, and a new enemy in the Church, Kelsea finds herself learning more about her powers and making some mistakes. She also finds herself overwhelmed by visions of a woman in a past time that could lead to answers about The Crossing. Cheers to Johansen for proving that the reign of Queen Kelsea will be thrilling from start to finish!”
— Flannery Fitch (E), Bookshop Santa Cruz, Santa Cruz, CA

In this riveting, New York Times-bestselling sequel to The Queen of the Tearling, the evil kingdom of Mortmesne invades the Tearling, with dire consequences for Kelsea and her realm.

With each passing day, Kelsea Glynn is growing into her new responsibilities as Queen of the Tearling. By stopping the shipments of slaves to the neighboring kingdom of Mortmesne, she crossed the Red Queen, a brutal ruler whose power derives from dark magic, who is sending her fearsome army into the Tearling to take what is hers. And nothing can stop the invasion.

But as the Mort army draws ever closer, Kelsea develops a mysterious connection to a time before the Crossing, and she finds herself relying on a strange and possibly dangerous ally: a woman named Lily, fighting for her life in a world where being female can feel like a crime. The fate of the Tearling —and that of Kelsea’s own soul—may rest with Lily and her story, but Kelsea may not have enough time to find out.

In this dazzling sequel, Erika Johansen brings back favorite characters, including the Mace and the Red Queen, and introduces unforgettable new players, adding exciting layers to her multidimensional tale of magic, mystery, and a fierce young heroine.

Erika Johansen grew up in the San Francisco Bay area. She went to Swarthmore College, earned an MFA from the Iowa Writers’ Workshop, and eventually became an attorney, but she never stopped writing.

“Meet the next Katniss Everdeen. If you missed last year’s The Queen of the Tearling, run, don’t walk, to get it.”
— Entertainment Weekly

“Get caught up with Kelsea, a heroine so badass, Emma Watson’s already signed up to play her.”
— Cosmopolitan

“Katniss Everdeen, you have competition. . . . A thrilling sequel.”
— Entertainment Weekly, The 10 Must-Reads of Summer

“A bold storytelling choice makes this so much more fascinating than just a saga of warring kingdoms. . . . Completely gripping . . . It’s satisfying while leaving readers desperate for the next volume.”
— Library Journal (starred review)

“The Invasion of the Tearling glides over the sophomore slump, carrying the series upward with it. . . . The new Tearling characters are fascinating, and Johansen introduces them so smoothly, we care for them almost the instant we learn their names.”
— Entertainment Weekly, A

“All hail Queen Kelsea! In the series’ second action-packed book, the teen saves her throne from a power-hungry neighbor.”
— Us Weekly

“An intoxicating brew of dystopian fiction, high fantasy, science fiction, and a bit of horror. . . . A thrilling and thought-provoking read that takes this trilogy to even greater heights.”
— Buzzfeed

“Johansen is a skillful maker of fantasy worlds, weaving medieval and modern themes together with the comprehensiveness of a George R.R. Martin. . . . A satisfying, well-crafted sequel that will leave readers looking forward to what might happen next.
— Kirkus Reviews

“A dazzling and gripping followup. . . . Expertly combining modern and medieval themes, Johansen ratchets up suspense as she weaves a magical story that crosses time . . . one of the most original and well-written series in recent memory.”
— USA Today.com

“Readers — Watson included — can’t seem to put down the novels, in large part because of the Queen of the Tearling herself: spunky, complex, tough-as-nails Kelsea Glynn.”
— Bustle

“The Mort are coming! Johansen introduces new characters and enticing bits of history, with the second volume of her intriguing tale of fantasy, mystery and royal politics...Readers will be eager for the final volume in the Tearling saga.”
— LibraryReads

“This compelling, intriguing read is hard to put down as the ultimate connection between the two women is revealed. {A} unique take on traditional fantasy.”
— Statesman Journal (Oregon)

“THE INVASION OF THE TEARLING sets itself apart from every other middle volume in a fantasy trilogy because of its brutal portrayal of politics and all its consequences.”
— Bookish

“Spend long enough with this piece of fiction, and you’ll emerge more keenly aware of our own pontificating pundits, our tides of refugees. Any sense of distance is quite imaginary.”
— Locus Magazine

“Will keep everyone on tenterhooks until the next book is released...a thought-provoking and finely tuned flight of fancy.”
— The Examiner.com

“the protagonist was a real ass-kicker with unwavering strength and fierceness (but not without realistic self-doubt), and there’s just the right combination of believable politics and fantasy realm magic.”
— Bookriot