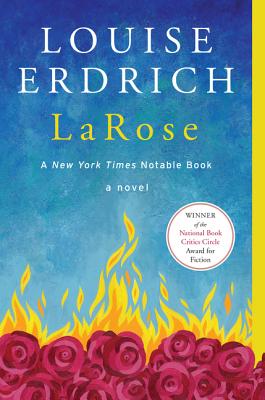 “When a hunting accident results in the death of his neighbor's son, Landreaux Iron follows native tradition and offers his own son, LaRose, to the bereaved family. Thus begins a powerful story of anger, love, hurt, and joy among a group of families and neighbors living in a small community in the North Dakota hinterland. Erdrich's luminous prose captures each character's struggle to overcome their worst impulses - whether it's a handicapped man's long-nurtured quest for revenge, or the pain of a mother withholding love from her daughter - and reaches into the distant past to reveal the story of the young boy's namesake, the original LaRose. Muted on the surface, but with a heart that beats strong, Erdrich's latest novel is a book to be treasured.”
— Peter Sherman (E), Wellesley Books, Wellesley, MA

Winner of the National Book Critics Circle Award in Fiction

Finalist for the PEN Faulkner Award

In this literary masterwork, Louise Erdrich, bestselling author of the National Book Award-winning The Round House and the Pulitzer Prize nominee The Plague of Doves, wields her breathtaking narrative magic in an emotionally haunting contemporary tale of a tragic accident, a demand for justice, and a profound act of atonement with ancient roots in Native American culture.

North Dakota, late summer, 1999. Landreaux Iron stalks a deer along the edge of the property bordering his own. He shoots with easy confidence—but when the buck springs away, Landreaux realizes he’s hit something else, a blur he saw as he squeezed the trigger. When he staggers closer, he realizes he has killed his neighbor’s five-year-old son, Dusty Ravich.

The youngest child of his friend and neighbor, Peter Ravich, Dusty was best friends with Landreaux’s five-year-old son, LaRose. The two families have always been close, sharing food, clothing, and rides into town; their children played together despite going to different schools; and Landreaux’s wife, Emmaline, is half sister to Dusty’s mother, Nola. Horrified at what he’s done, the recovered alcoholic turns to an Ojibwe tribe tradition—the sweat lodge—for guidance, and finds a way forward. Following an ancient means of retribution, he and Emmaline will give LaRose to the grieving Peter and Nola. “Our son will be your son now,” they tell them.

LaRose is quickly absorbed into his new family. Plagued by thoughts of suicide, Nola dotes on him, keeping her darkness at bay. His fierce, rebellious new “sister,” Maggie, welcomes him as a coconspirator who can ease her volatile mother’s terrifying moods. Gradually he’s allowed shared visits with his birth family, whose sorrow mirrors the Raviches’ own. As the years pass, LaRose becomes the linchpin linking the Irons and the Raviches, and eventually their mutual pain begins to heal.

But when a vengeful man with a long-standing grudge against Landreaux begins raising trouble, hurling accusations of a cover-up the day Dusty died, he threatens the tenuous peace that has kept these two fragile families whole.

Inspiring and affecting, LaRose is a powerful exploration of loss, justice, and the reparation of the human heart, and an unforgettable, dazzling tour de force from one of America’s most distinguished literary masters.

Louise Erdrich, a member of the Turtle Mountain Band of Chippewa, is the author of many novels as well as volumes of poetry, children’s books, and a memoir of early motherhood. Her novel The Round House won the National Book Award for Fiction. Love Medicine and LaRose received the National Book Critics Circle Award for Fiction. Erdrich lives in Minnesota with her daughters and is the owner of Birchbark Books, a small independent bookstore. Her most recent book, The Night Watchman, won the Pulitzer Prize. A ghost lives in her creaky old house.

“A masterly tale of grief and love…Erdrich never missteps…The recurring miracle of Erdrich’s fiction is that nothing feels miraculous in her novels. She gently insists that there are abiding spirits in this land and alternative ways of living and forgiving that have somehow survived the West’s best efforts to snuff them out.” — Washington Post

“The rewards of LAROSE lie in the quick unraveling and the slow reconstruction of these lives to a moment when animosities resolve, like shards of glass in a kaleidoscope, into clarity and understanding...Told with constraint and conviction...” — Los Angeles Times

“You’re going to want to take your time with this book, so lavish in its generational scope, its fierce torrent of wrongs and its luxurious heart. Anyway, you may have no choice, as you fall under the spell of a master… Like Toni Morrison, like Tolstoy, like Steinbeck, Erdrich writes her characters with a helpless love and witnesses them with a supreme absence of judgment…[a] beautiful novel.” — San Francisco Chronicle

“Remarkable…As the novel draws to a conclusion, the suspense is ratcheted up, but never at the expense of Erdrich’s reflective power or meditative lyricism…One of Erdrich’s finest achievements.” — Boston Globe

“Incandescent…Erdrich has always been fascinated by the relationship between revenge and justice, but…LaRose comes down firmly on the side of forgiveness. Can a person do the worst possible thing and still be loved? Erdrich’s answer is a resounding yes.” — New York Times Book Review, front page review

“[Erdrich] has laid out one of the most arresting visions of America in one of its most neglected corners, a tableaux on par with Faulkner, a place both perilous and haunted, cursed and blessed.” — Chicago Tribune

“[A] sad, wise, funny novel, in which [Erdrich] takes the native storytelling tradition that informs her work and remakes it for the modern world, stitching its tattered remnants into a vibrant living fabric.” — Minneapolis Star Tribune

"[A] superb new novel…[Erdrich immerses] us in this remarkable world so thoroughly, so satisfyingly.” — Miami Herald

“Erdrich’s richly layered tale brings a host of fascinating characters to life as it builds to its haunting resolution.” — People

“Breathtaking…[LaRose] may be her most graceful creation…The recurring miracle of Erdrich’s fiction is that nothing feels miraculous in her novels. She gently insists there are abiding spirits in this land and alternative ways of living and forgiving that have somehow survived the West’s best efforts to snuff them out.” — Denver Post

“Erdrich’s created an entire world, a realm bristling with a sense of place, where plots unwind and surprise, the spirit world suffuses everyday existence, and the past is as much a part of the present as breathing…magnificent…It is Erdrich at the top of her form.” — Providence Journal

"A brutal, ultimately buoyant dramatization of the way unexpected kinships heal us.” — O, the Oprah Magazine

“Mesmerizing… Throughout her body of work, Erdrich has woven complex narratives with rich character detail and the cultural traditions of her Native American background. In LaRose, her greatest strengths are on display as all these strands come together under her masterful control.” — Chapter 16

“Erdrich suffuses the book with her particular sort of magic-an ability to treat each character with singular care, weaving their separate journeys flawlessly throughout the larger narrative, and making each person’s pain feel achingly real. All the while, she adds new depth to timeless concepts of revenge, culture, and family.” — Entertainment Weekly

“A magnificent novel from suicide to possible salvation, murder to redemption, vengeance to volleyball. It is Erdrich at the top of her form.” — Providence Journal

“A complex tapestry of retribution and acceptance…Ever the master of emotions, Erdrich…incorporates elements of guilt, justice and atonement.” — Bookreporter.com

“In someone else’s hands, this might turn out to be a stark morality tale or a pure tearjerker. In Louise Erdrich’s, it’s something else altogether… a novel more generous and less predictable than might be expected, where revenge and human planning in general take second place to life working itself out in ways that no one human can predict or control.” — The Columbus Dispatch

“Louise Erdrich’s latest novel LAROSE is, as usual, a gift to treasure… Erdrich writes about reconnection and reconciliation with such purity and precision, she’ll crack your heart right open, then mend it with care and leave your whole soul singing with joy.” — Buzzfeed

“A fiercely resonant exploration of love, loss, and the tangled ties that bind.” — Entertainment Weekly, "Best Books of 2016 so far..."

“[A] meditative, profoundly humane story…Electric, nimble, and perceptive, this novel is about ‘the phosphorous of grief’ but also, more essentially, about the emotions men need, but rarely get, from one another.” — Kirkus Reviews (starred review)

“A brilliantly imagined and constructed saga of empathy, elegy, spirituality, resilience, wit, wonder, and hope that will stand as a defining master work of American literature for generations to come.” — Booklist (starred review)