The Official CIA Manual of Trickery and Deception (Paperback) 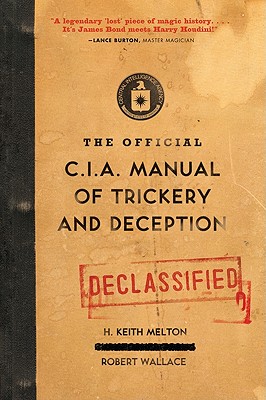 H. Keith Melton, a graduate of the U.S. Naval Academy, is an intelligence historian and a specialist in clandestine technology and espionage "tradecraft." He is the author of several books, including CIA Special Weapons and Equipment, Clandestine Warfare, and The Ultimate Spy Book.

Robert Wallace retired from the CIA in 2003 with thirty-two years of service as an operations officer and senior executive, including an assignment as director of the Office of Technical Services. Wallace is coauthor, with H. Keith Melton, of Spycraft: The Secret History of the CIA's Spytechs from Communism to Al-Qaeda.

“An enchanting account of espionage and wizardry at their blackest.” — Peter Earnest, Executive Director of the International Spy Museum

“Melton and Wallace have achieved the ultimate mastery of the shadow world where CIA’s smoke and mirrors meet Hollywood’s art of magic, deception and illusion. Like any good stage show, the never-before-disclosed techniques are spellbinding. The history of espionage is expanded by this factual, fascinating account.” — Tony and Jonna Mendez, Masters of Disguise

“Entrancing! I was amazed to see how the magician’s trade can be twisted to aid in the dark arts of espionage.” — Jeff McBride, Creator of The Magic and Mystery School

“Espionage and magic! A special thrill to read the once-classified CIA magician’s manual.” — Danny Biederman, author of The Incredible World of SPY-Fi