The Family Fang: A Novel (Paperback) 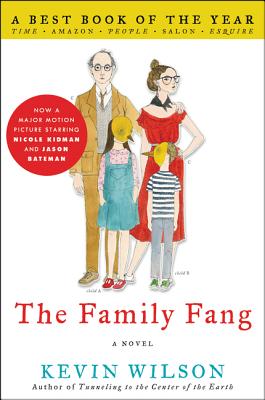 “If Salinger's fabled Glass siblings had been raised by avant-garde 1980's performance artists they might have turned out like Annie and Buster - Child A and Child B in their parents' performance art happenings. All families are odd in their own ways, and Kevin Wilson simply amplifies the confusion that all parents induce in their children. I loved the fringe art world setting with its weird blend of humor and discomfort, but the very familiar quest of adult children coming to grips with the legacy of flawed parents is at the hear of this funny, disquieting novel.”
— Robert McDonald, The Book Stall At Chestnut, Winnetka, IL

NEW YORK TIMES BESTSELLER • NAMED ONE OF THE TEN BEST BOOKS OF THE YEAR BY TIME, PEOPLE, SALON, AND ESQUIRE

“The Family Fang is a comedy, a tragedy, and a tour-de-force examination of what it means to make art and survive your family….The best single word description would be brilliant.”
—Ann Patchett, author of Bel Canto

A funny, poignant, laugh-and-cry-out-loud (sometimes at the same time) novel about the art of surviving a masterpiece of dysfunction. Meet The Family Fang, an unforgettable collection of demanding, brilliant, and absolutely endearing oddballs whose lives are risky and mischievous performance art. Basis for the major motion picture starring Nicole Kidman, Jason Bateman and Christopher Walken.

Annie and Buster Fang have spent most of their adult lives trying to distance themselves from their famous artist parents, Caleb and Camille. But when a bad economy and a few bad personal decisions converge, the two siblings have nowhere to turn but their family home. Reunited under one roof for the first time in more than a decade and surrounded by the souvenirs of their unusual upbringing, Buster and Annie are forced to confront not only their creatively ambitious parents, but the chaos and confusion of their childhood.

Kevin Wilson is the author of the novels The Family Fang, a New York Times bestseller adapted into an acclaimed film starring Nicole Kidman, and Perfect Little World, as well as the story collections Tunneling to the Center of the Earth, winner of the Shirley Jackson Award, and Baby, You’re Gonna Be Mine. He lives in Sewanee, Tennessee, with his wife and two sons.

“In his debut novel, Kevin Wilson expertly navigates between pathos and black comedy while negotiating a smart debate about the human cost of sacrificing all for one’s art. Fang has bite but is also incredibly fun.”
— Time magazine, Top 10 Fiction Books of 2011

“Wilson writes stylishly...but his real skill is...building up a slow-drip mystery....And [this] isn’t the kind of book you [can] set aside....(I’m looking at you, Swamplandia!) It’s the kind of book in which you need to know what happens...It’s not what you think.”
— Esquire, 10 Best Books of 2011

“First-time novelist Wilson mixes dire humor and melancholy in this satirical portrait of the uniquely dysfunctional Fangs––husband-and-wife performance artists Caleb and Camille and their children, Annie and Buster—and offers a scathing critique of how the baby-boom generation maltreated Gen X.”
— Booklist Top Ten First Novels of 2011

“This book was my favorite for the sheer force of its creativity… powerful, funny and deeply strange. You won’t read anything else like it.”
— Ann Patchett's Favorite Books of 2011 on Salon.com

“A wacky, wonderful debut about a performance artist couple and their long suffering kids.”
— People

“Wilson writes with the studied quirkiness of George Saunders or filmmaker Wes Anderson, and there’s some genuine warmth beneath all the surface eccentricity.”
— Entertainment Weekly

“What can you say for a novel about performance artists that begins “Mr. and Mrs. Fang called it art. Their children called it mischief”? ... That it’s totally weird, and pretty wonderful. Most of all, that it manages to be brainy without sacrificing heart.”
— O, the Oprah Magazine

” [A] revitalizing blast of original thought; robust invention; screwball giddiness.... a family story that’s out-of-the-box, and funny, and, also, genuinely moving. Wilson’s inventive genius never stops for a rest break.... [a] strange and wonderful novel...that will linger in your mind long after.”
— NPR.org