The Conservative Soul: Fundamentalism, Freedom, and the Future of the Right (Paperback) 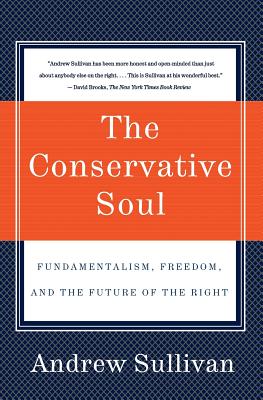 "As engaging as it is provocative. . . . Sullivan’s book should be read closely by liberals as well as conservatives.” — Jonathan Raban, The New York Review of Books

One of the nation's leading political commentators makes an impassioned call to rescue conservatism from the excesses of the Republican far right, which has tried to make the GOP the first fundamentally religious party in American history.

In this bold and powerful book, Andrew Sullivan makes a provocative, prescient, and heartfelt case for a revived conservatism at peace with the modern world, and dedicated to restraining government and empowering individuals to live rich and fulfilling lives.

Andrew Sullivan is one of today's most provocative social and political commentators. An essayist for Time magazine, a columnist for The Sunday Times of London, and a senior editor at The New Republic, he is also the editor of "The Daily Dish," one of the most widely read political blogs on the Web. He lives in Washington, D.C.

“Andrew Sullivan has been more honest and open-minded than just about anybody else on the right. . . . His book is important, not only because he is willing to re-examine his own views relentlessly, but also because this is a moment when conservatism is in tumult. . . . The Conservative Soul is imbued with Sullivan’s characteristic passion and clarity. . . . This is Sullivan at his wonderful best.”
— David Brooks, The New York Times Book Review

“A kind of bildungsroman of Sullivan in the 9/11 years. . . . His invective is scorching, and one is happy he has turned on his former big-tent mates. . . . There is the reflection of a memoir in this book, a lingering heat and passion that are the detritus of a personal struggle.”
— New York magazine

“Intellectually challenging and thoroughly captivating. . . . Sullivan is blessed with an insatiable appetite for ideas and argument. . . . What he has to say about most things is interesting, elegantly expressed, and deeply thought through.”
— The Economist

“Sullivan’s is at once an obvious yet much-needed siren. . . . The Conservative Soul calmly and rationally attempts to deduce the malady that in barely 15 years has rendered Reagan-era conservatism all but unrecognizable.”
— Bryan Burrough, The Washington Post Book World

“The Conservative Soul is as engaging as it is provocative. . . . Brilliantly exposes the contradictions of the Republican Party. . . . Sullivan’s alienated eye allows him to probe fundamentalist Christian theology with impressive clarity. . . . Sullivan’s book should be read closely by liberals as well as conservatives.”
— Jonathan Raban, The New York Review of Books

“An adept social commentator, Sullivan skewers errant nonsense. . . . The Conservative Soul will be a success. Sullivan is a lucid, intelligent writer...a genuine pleasure to read.”
— Commonweal