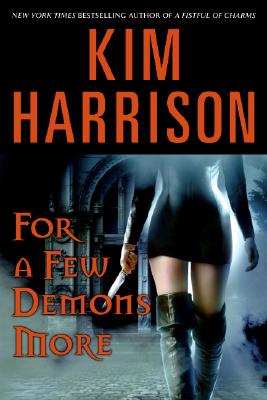 This is book number 5 in the Hollows series.

Despite dating one vampire and living with another, Rachel Morgan has always managed to stay just ahead of trouble . . . until now.

A fiendish serial killer stalks the Hollows, claiming victims across society, and the resulting terror ignites a vicious Inderland gang war. And while the ancient artifact Rachel is hiding may be the key to stopping the murderer, revealing it could also create a battle to the death among the numerous supernatural races that live in and around Cincinnati.

For every action has its price, and when the vampire master Piscary is set free and the demonic Algaliarept dares to walk openly under the sun, even Rachel Morgan can't hide forever.

“Her work can read like a smoldering combination of Alice Waters and Ozzy Osbourne.”
— New York Times Book Review

“Action-packed... Rachel boldly tackles every challenge amid a cascade of plot twists that will delight Harrison’s fans.”
— Publishers Weekly

“Harrison makes Rachel’s conflicts real and poignant without turning them into melodramatic slush. .. Harrison devotees should find ample emotional revelations and plot resolution, with enough loose ends to have them eagerly awaiting the next installment.”
— Kirkus Reviews