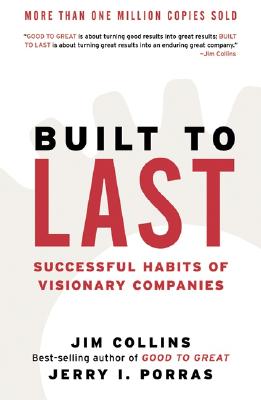 This is book number 2 in the Good to Great series.

Drawing upon a six-year research project at the Stanford University Graduate School of Business, Collins and Porras took eighteen truly exceptional and long-lasting companies -- they have an average age of nearly one hundred years and have outperformed the general stock market by a factor of fifteen since 1926 -- and studied each company in direct comparison to one of its top competitors. They examined the companies from their very beginnings to the present day -- as start-ups, as midsize companies, and as large corporations. Throughout, the authors asked: "What makes the truly exceptional companies different from other companies?"

What separates General Electric, 3M, Merck, Wal-Mart, Hewlett-Packard, Walt Disney, and Philip Morris from their rivals? How, for example, did Procter & Gamble, which began life substantially behind rival Colgate, eventually prevail as the premier institution in its industry? How was Motorola able to move from a humble battery repair business into integrated circuits and cellular communications, while Zenith never became dominant in anything other than TVs? How did Boeing unseat McDonnell Douglas as the world's best commercial aircraft company -- what did Boeing have that McDonnell Douglas lacked?

By answering such questions, Collins and Porras go beyond the incessant barrage of management buzzwords and fads of the day to discover timeless qualities that have consistently distinguished out-standing companies. They also provide inspiration to all executives and entrepreneurs by destroying the false but widely accepted idea that only charismatic visionary leaders can build visionary companies.

Filled with hundreds of specific examples and organized into a coherent framework of practical concepts that can be applied by managers and entrepreneurs at all levels, Built to Last provides a master blueprint for building organizations that will prosper long into the twenty-first century and beyond.

Jim Collins is a student and teacher of what makes great companies tick, and a Socratic advisor to leaders in the business and social sectors. Having invested more than a quarter-century in rigorous research, he has authored or coauthored six books that have sold in total more than 10 million copies worldwide. They include Good to Great, Built to Last, How the Mighty Fall, and Great by Choice.

Driven by a relentless curiosity, Jim began his research and teaching career on the faculty at the Stanford Graduate School of Business, where he received the Distinguished Teaching Award in 1992. In 1995, he founded a management laboratory in Boulder, Colorado.

In addition to his work in the business sector, Jim has a passion for learning and teaching in the social sectors, including education, healthcare, government, faith-based organizations, social ventures, and cause-driven nonprofits.

In 2012 and 2013, he had the honor to serve a two-year appointment as the Class of 1951 Chair for the Study of Leadership at the United States Military Academy at West Point. In 2017, Forbes selected Jim as one of the 100 Greatest Living Business Minds.

Jim has been an avid rock climber for more than forty years and has completed single-day ascents of El Capitan and Half Dome in Yosemite Valley.

Learn more about Jim and his concepts at his website, where you’ll find articles, videos, and useful tools. jimcollins.com

Jerry I. Porras is the Lane Professor of Organizational Behavior and Change, Emeritus, at the Stanford University Graduate School of Business where he served as an Associate Dean for Academic Affairs and frequent executive education teacher. He studies ways of aligning companies around their purpose and core values to produce lasting high performance.