A Year in the Life of William Shakespeare: 1599 (Hardcover) 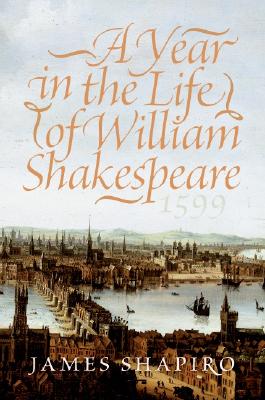 By James Shapiro
$27.95
UNAVAILABLE-Possible Reasons: Backordered, Out-of-Stock, or Out-of-Print (But email us to search for a copy.)

What accounts for Shakespeare’s transformation from talented poet and playwright to one of the greatest writers who ever lived? In this gripping account, James Shapiro sets out to answer this question, "succeed[ing] where others have fallen short." (Boston Globe)

1599 was an epochal year for Shakespeare and England. During that year, Shakespeare wrote four of his most famous plays: Henry the Fifth, Julius Caesar, As You Like It, and, most remarkably, Hamlet; Elizabethans sent off an army to crush an Irish rebellion, weathered an Armada threat from Spain, gambled on a fledgling East India Company, and waited to see who would succeed their aging and childless queen.

James Shapiro illuminates both Shakespeare’s staggering achievement and what Elizabethans experienced in the course of 1599, bringing together the news and the intrigue of the times with a wonderful evocation of how Shakespeare worked as an actor, businessman, and playwright. The result is an exceptionally immediate and gripping account of an inspiring moment in history.

James Shapiro, aprofessor at Columbia University in New York, is the author of Rival Playwrights, Shakespeare and the Jews, and Oberammergau.

“Only an extraordinary scholar could illuminate Shakespeare’s singular genius by demonstrating how much his work owes to Elizabethan cultureandsociety.” — Alexandra Alter, Chicago Tribune

“an unforgettable illumination of a crucial moment in the life of our greatest writer.” — Robert McCrum, The Observer

“[This] is one of the few genuinely original biographies of Shakespeare.” — Jonathan Bate, Sunday Telegraph

“a brilliantly readable and revealing narrative.” — Nicholas Hytner, The Guardian

“For Irish readers...by far the best account yet written of the relationship between this island and Shakespeare’s work.” — Fintan O'Toole, Irish Times

“If Will in the World is essentially an extremely good historical novel, [YLOWS] is history itself” — Jeremy Treglown, Financial Times

“Shapiro gives us a Shakespeare who chronicles his age, in a biographical form that speaks clearly to our own.” — Francis Wilson, Saturday Telegraph

“Mr. Shapiro has given us by his encyclopedic scholarship and lucid narrative a hitherto unknown Shakespeare.” — Jacques Barzun, author of From Dawn to Decadence

“a stunning exhibition of scholarly intelligence by an academic deeply committed to arriving at the truth.” — Christopher Rush, Sunday Herald, Halifax

“Shapiro’s scrupulous scholarship has given us a Shakespeare both for his time and our own.” — David Scott Kastan, General Editor, The Arden Shakespeare

“An intriguing addition to Shakespeare studies...open-minded readers will be stimulated and enriched by Shapiro’s contextual approach.” — Kirkus Reviews (starred review)