Being in a book group is a surprisingly satisfying endeavor for people of all ages and backgrounds. As New York Times writer James Atlas observed earlier this year, "book groups are about community... We spend our days at airports or commuting to work; our children come and go; our friends climb up and down the social ladder; we change jobs and move house. No one knows their neighbor. But a lot of us are reading The Goldfinch." 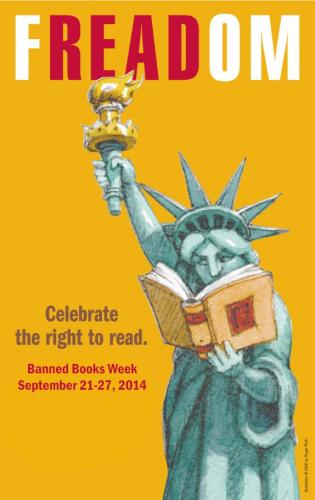 “You don't have to burn books to destroy a culture. Just get people to stop reading them.”

Along with the rest of the nation, we are dedicating a week to pondering the issues of censorship in our beloved field of literature. Banned Books Week has been going strong since 1982, when the United States experienced a sudden upswing of book-challenging, but attempted book censorship has been going on for much longer, and continues into the present day. U.S. District Court judge Joseph L. Tauro, when faced with ruling to uphold or strike down a school book ban, wisely stated that "the most effective antidote to the poison of mindless orthodoxy is ready access to a broad sweep of ideas and philosophies. There is no danger from such exposure. The danger is mind control."

According the the  American Library Association, "a challenge is an attempt to remove or restrict materials, based upon the objections of a person or group.  A banning is the removal of those materials.  Challenges do not simply involve a person expressing a point of view; rather, they are an attempt to remove material from the curriculum or library, thereby restricting the access of others. Due to the commitment of librarians, teachers, parents, students and other concerned citizens, most challenges are unsuccessful and most materials are retained in the school curriculum or library collection." Often cited reasons for challenging a book's presence include violence, offensive language, homosexuality, religious viewpoints, satanic themes, sexual explicitness, and inappropriateness for age group. Some recent examples of most challenged books are respesented below (and are, of course, available for purchase here at The Bookloft!).

Unfortunately, some challenges do work, ending in the book being banned, in a particular school, for instance, or even a whole city, state or country. Below are a few examples of books that have been banned within the United States, but thanks in great part to many first amendement court cases, these bans have since been overthrown.

To read the sources of the information discussed above, and to learn more, visit www.bannedbooksweek.org and www.ala.org/bbooks/bannedbooksweek

“Not all those who wander are lost.”

― J.R.R. Tolkien, The Fellowship of the Ring

Every year around this time, we get to play host to a large (well, larger than usual) number of hikers, as thru-hikers find themselves trekking the Appalachian Trail portion that runs through Great Barrington. We love to see the hikers go out of their way to stop in here and pick up a good book for the journey! Whether you’re hiking or not, we’ve got more than a few ideas of great books to put you in the mood for some good old fashioned wandering…

It’s August! What? How did that happen?? That means there’s only a month left to get your kids’ to read their summer reading assignments! Hopefully, this isn’t a problem (everyone loves reading… right?), but it’s always worth going the extra mile to make sure a child chooses a book that will really interest them. The better they like this book the more they’ll look forward to the next!

So stop by and take a look at the bookshelf we’ve set up exclusively comprising of children’s summer reading books. Included are books that are on local school lists- required and recommended. Plus, some of our booksellers' favorites from our own school days…! Can’t figure out what to pick? Just ask! We love helping you and yours find just the right book.

Here are just a few recommended summer reads that also happen to be Staff Picks!

Don’t expect any staff picks from me this month: I’m 200 pages into Middlemarch and predict that it will take me another couple of weeks to finish. People are put off by the length of this book; we’re just not in the habit of reading lots and lots of words in what is sometimes a reiterative style. It helps to remember that the book was published in installments and that the author got paid by the word.  Eliot uses all those words to build her characters and her story really does flow once you get the rhythm.

If you don’t, however, want to join me in reading Middlemarch, you might want to try Marine Park: Stories due out July 29th. I read it as an advance and was wowed by this 23-year-old’s acuity. I guess I lied: I do have a staff pick for July and I think you’ll love these stories. If you are unfamiliar with this neighborhood on the edge of Brooklyn, you’ll...Hey, I’m not getting paid by the word! As I was packing up for a recent writing retreat, I was determined not to weigh my bag down with books, so I reluctantly dusted off my barely used e-reader and downloaded a few instead. I’m a longtime reader, and a writer by vocation, and I love real books now as much as I did when I was a teen. I love the feel of them, the smell, the weight, the way my eyes track and catch on the serif font as I read across the page then blink to hit the invisible carriage return to bring me to the next satisfying line. Sometimes I run my finger across the paper and trick myself into thinking I can actually feel the letters in bas-relief. So when I say reluctantly, I mean it.

Now I have to confess: there was something unexpectedly delightful about the stretch of e-reading I did on my retreat. During my time away, I spent my writing hours doing something I rarely do anymore: writing longhand in a hardcover notebook. And the movement from the “analog” experience of pulling a pen across the thick paper line after line, to pressing a tiny rectangular button to activate the slick, smooth screen of my e-reader was, I admit, pretty darn cool. I confess also to loving the function that allows me to look up a definition of a word with the light press of my finger (I’m not going to tell you which words they were—I have my pride), though I’ll never shed my oversized Merriam Webster Collegiate Dictionary.

E-books and e-readers aren’t for everyone, and when space on my nightstand and messenger bag allow for it, I will always reach for the real thing. In the meantime, though, I will finish the books I downloaded (see below)—and who knows, maybe I will keep my e-reader dusted off, just in case.

Bad Boy: My Life on and off the Canvas by Eric Fischl

Learning to Walk in the Dark by Barbara Brown Taylor

The Empathy Exams by Leslie Jamison

The Sea Inside by Philip Hoare

Tis that time of year again! The time of the incomprehensibly flat hats, very expensive pieces of paper, sweltering robes, speech-making, tear-shedding, hug-induced all-body numbness, and best of all... gifts! It’s the end of an era, and as a family member or friend of a soon-to-be grad, it’s your job to give a gift that is worth giving to someone with such a shiny new status. Granted, the hugs and the tears will probably be the best gift, but, sadly, it’s hard to tie a ribbon on those. Books, on the other hand, are ideally shaped for ribbons and wrapping! So here are some of our suggestions for grad gifts this year. 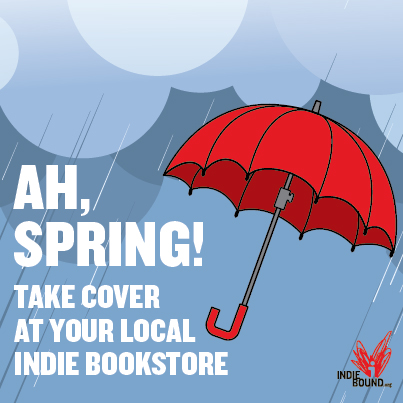 We’re calling it- winter reading is over. As much as we love the sleepy, snuggly, snowy kind of reading, we’re ready for the new, fresh, and springy reads! So here’s our most recent spring-time-ready picks!

And don’t forget you can check out what we’ve been in the mood to read here and what we’ve loved reading the most here! 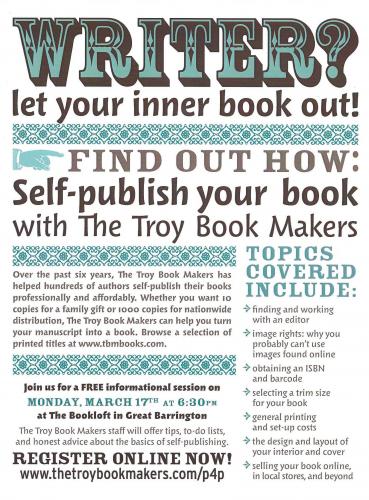 You've just put your cap back on your pen or saved the last sentence. You're latest work is now complete. Now what? Join Jessika, manager of The Troy Book Makers, to find out more about polishing your completed work, getting ready for print, and what steps you can take to sell your book. This is an informational session that gives authors the basics about self-publishing. The Troy Book Makers staff provides tips, to-do lists, and honest advice.

And remember, after you've published your book, we'd be happy to carry it! Check out our consignment program for local authors here.

Douglas Whynott, author of Giant Bluefin and A Unit of Water, A Unit of Time: Joel white's Last Boat, has a new book coming out- on maple syrup! And, as a solid New England business,  how could we not be excited to hear what he's got to say? Stop in on sunday, March 9th at 4pm to learn more about the book, The Sugar Season, Whynott, and the maple industry. See you there!!

"Whynott has delivered the most complete and compelling account to date of the modern maple industry. His cast of vividly drawn characters and his descriptions of the challenges they overcome will make you feel like you're right there beside them in the North Country's sugarbushes. It's one sweet read."--Barry Estabrook, author of "Tomatoland"

"The cycle of the maple season is one of the great signifiers of the mountain year in the northeast. It is lovingly delineated here, with a foreshadowing of the shifts ahead in a changing world. May it move us to action!"--Bill McKibben, author of "Oil and Honey"

"Once again, Douglas Whynott demonstrates his uncanny ability to open up what seems to be ordinary and reveal it as something much more than we ever could have imagined. In this case, it's the maple syrup industry, and Whynott take us from the metal bucket hanging on a tree into a world of currency bets, Global Strategic Reserves, climate change, and international trade. It's quite a story, and quite a book."--Daniel Okrent, author of "Last Call: The Rise and Fall of Prohibition"